Stroller Is My Fitness

Grab Your FREE Walkingmama Stroller Fitness Guide and get my latest articles delivered to your email!
GET ACCESS NOW
FIRST ebook on how to turn Your Baby Stroller Into Your Gym
BUY KINDLE BOOK
You are here: Home / JOGGING STROLLERS / Joovy Zoom 360 Ultralight Stroller Review

I chose this stroller for my second son and I used it every day for three years.

See my happy face in the photo above? That picture was taken just after I had assembled my Joovy, but before I realised that the manufacturers had removed the handbrake feature.

Ugh. If I had known there was no handbrake I wouldn’t even have tried to order it but I didn’t have enough time or money to return it (I live in Europe and had already paid customs fees to import it from the US)

Read my review below to find out if the Joovy’s other features are enough to outweigh this disadvantage.The review combines my own three years of experience with the Joovy 360 with a thorough analysis of available customer reviews and feedback.

Along with its closest competitor, BOB Ironman, I think Joovy is one of the best on the market.

Walkingmama says:  I rate Joovy equal to BOB, because both have similar features and high-end materials. Joovy offers a larger leg drop, a taller handlebar and has no rear axle so you can take longer steps. If they would keep the handbrake (a standard feature in previous models) I would rate it 5 stars!

For my detailed review, I have considered the Joovy 360 from two perspectives: Sport Performance and Real Life. 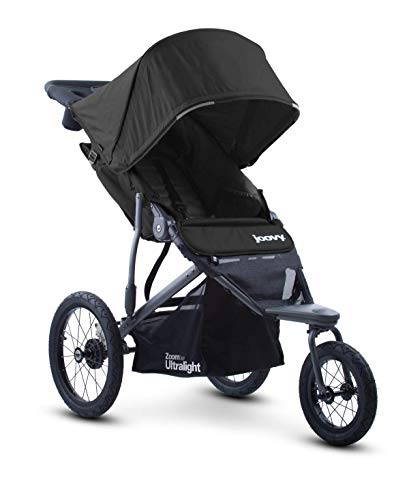 Is Joovy Zoom 360 Good For Sports?

Rugged yet sporty, the Joovy Zoom 360 is great for jogging and power walking  and everything has been done to ensure a smooth, comfortable ride. It is sturdy and easy to steer, once you have mastered turning corners, and  it promises to last for many years (although during my three years of intense walking, the rear wheel spokes had to be repaired several times and the fabric and plastic components have almost worn out).

It is not, however, suitable for the serious runner because, when the front wheel is fixed, it can be difficult to maneuver. The handlebar is also fixed, but Joovy offers a solution that minimises this issue: it has no rear axle, which makes your run more comfortable because you’re not constantly at risk of stepping on it whilst running.

Joovy Zoom 360 seems to be designed for taller and more athletic parents. When the front wheel is fixed, the taller handle means that it takes quite a lot of effort to push it.

Does it work for Strollnetics?

Initially I was disappointed as, for my Strollnetics, it’s better to have an adjustable handlebar. But because so many joggers come with a fixed handle, I have managed to come up with a solution. I’m happy to report that I’ve now been doing my Strollnetics exercises for 3 years with my Joovy Zoom and all the workouts (Arms, Abs and Buttocks) work perfectly.

Joovy Zoom 360 seems to be designed for taller and more athletic parents. When the front wheel is fixed, the taller handle means that it takes quite a lot of effort to push it.

Is It Good For Real Life?

Absolutely. Joovy is the largest stroller available on the market and its capacity  is really impressive (it can carry up to 75 lbs) Joovy is suitable for even 4-5-year-olds thanks to an astonishing leg drop of 13″ (vs 8-10 on other strollers).

Does it have any weaknesses?

The only real issue with the Joovy Zoom is the missing the handbrake, although, a couple of other points are worth emphasising:

For two years my Joovy had no problems so I assume this is the guaranteed warranty period for this jogger.

My name is Lena Filatova and I’m a mother of a 6 year old son. Stroller Walking has become my sport and the way of life for almost four years: I've walked with the baby stroller more than 5000 miles, as well as developed Strollnetics and promoted Fitness Rollerblading for Moms. In fact, I haven’t invented anything, I just rethink the way a mom can do more sport and have more freedom staying with her child.

Grab Your FREE Walkingmama Stroller Fitness Guide by Subscribing to the Newsletter!